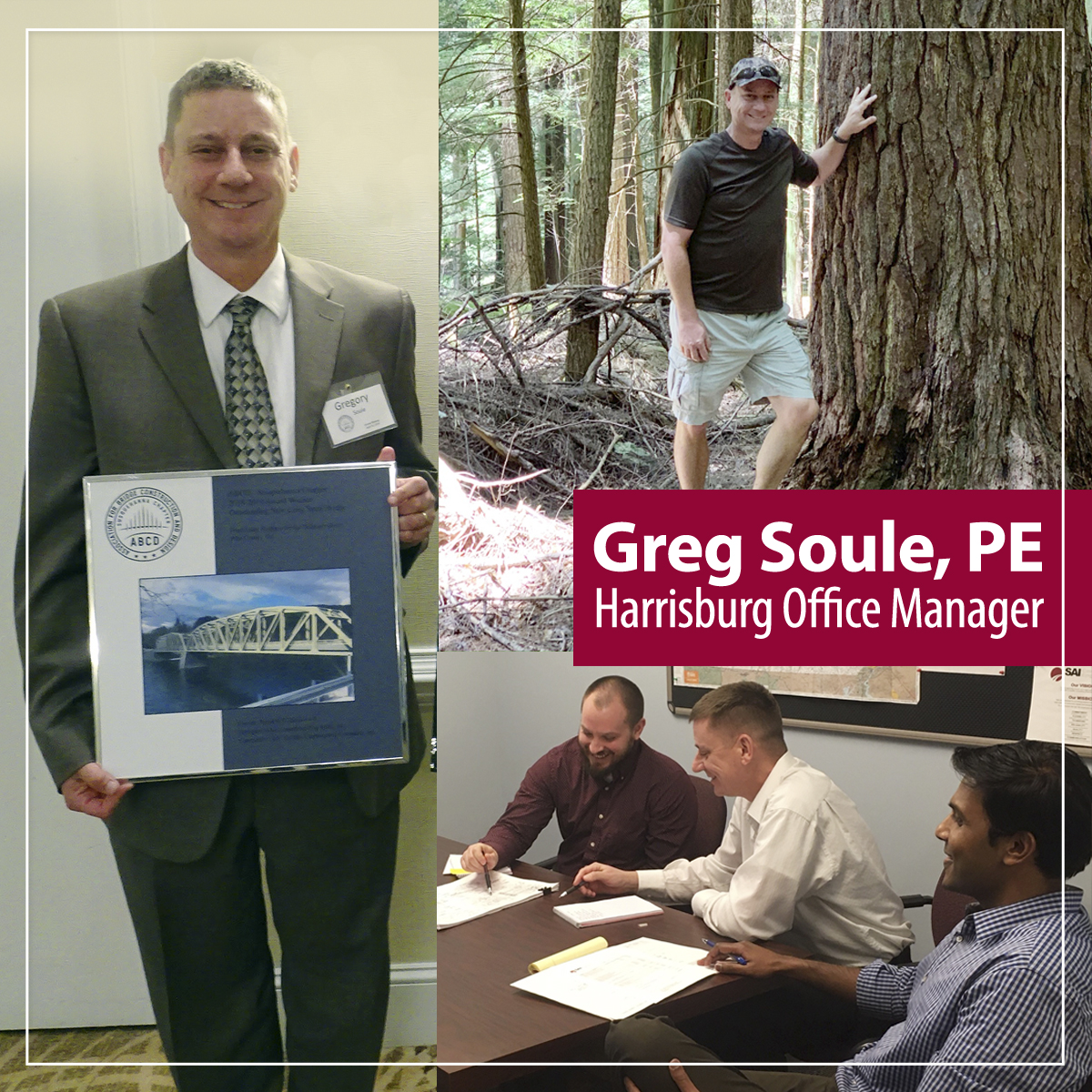 Greg is not only the Harrisburg Office Manager, but he has been a Project Manager with SAI for more than 12 years now. He has led transportation projects in all of PennDOT’s eastern and central Districts, including District 3-0, where he serves as the overall Agreement Manager on SAI’s current Open-End contract. Under this agreement, he has overseen the execution of more than 25 different work orders with a wide variety of assignments, including coordination of 18 emergency permits needed to repair flood damaged roadways and bridges; geotechnical exploration of a potential slide area; PE and FD for a truss superstructure replacement; and FD for the deck replacement on a 4-span structure over the Tioga River, among others.

After starting engineering work on the PA 287 deck replacement project (Tioga County) in 2010, design stalled for nearly a decade due to prioritization of other Department projects. SAI received the green light to restart our work in Fall 2019, and we were able to deliver the PS&E package in short order, allowing construction to begin in early 2020. Greg, who served as the PM, and the entire SAI team will be extremely pleased to see the bridge fully reopened to traffic when construction is completed in June 2021.

One of Greg’s favorite SAI projects is the Pond Eddy Bridge Replacement project (winner of the 2018 ABCD Outstanding New or Reconstructed Long Span Bridge) over the Delaware River in District 4-0. The original bridge was a pin-connected, Pennsylvania Petit thru-truss structure constructed in 1905. After years and years of coordination with FHWA, PennDOT, NYSDOT, the National Park Service, PA and NY Historic Preservation Offices, numerous Delaware River organizations, and countless key stakeholders in the area, we designed a 506 foot long, two simple-span, steel Pratt truss bridge as the replacement.

Not only did the project involve an extremely rare structure design, but Greg was instrumental in the successful navigation of some extremely tricky waters with permitting and constructability along the way (pun intended). Some of the unique design features included an 8-stage causeway and ATON Plan to allow continuous boating through the construction area for the 1000’s of boater using the Delaware River each year; relocation of freshwater mussels; flow velocity restrictions to allow shad and eel migrations; noise restrictions for bald eagles; and an on-site archaeological monitor during construction to protect the remains of a historically significant canal near the bridge. Construction was completed and the bridge opened to traffic in 2019. Greg notes, “While very challenging at times, the final product was a great testament to engineering and teamwork.”

After being in the industry for more than 20 years, Greg’s understanding of engineering has evolved.  “Many of us entered the engineering field with the idea that we would spend most of our working day with our head down doing calculations and preparing plans, while only interacting with our peers from time-to-time.”  However, Greg’s real-world experience is quite different. “Between emails, phone calls, society gatherings, golf outings and leagues, and now Teams meeting after Teams meeting this past year, my day is dominated by collaboration  with my co-workers and colleagues, many of which I now call good friends. I never expected this would be the case when starting out so long ago and could not be more thankful that I was so mistaken.”